Dayana Mendoza - Queen of the Universe


Venezuela has done it again. In front of a TV audience estimated at over one billion people in 180 countries, 22-year-old Dayana Mendoza took the coveted Miss Universe crown in Vietnam on Monday, becoming the fifth Venezuelan to win the prestigious beauty prize.

Maritza Sayalero first won the competition for Venezuela in 1979. She was followed by Irene Saez Conde in 1981, Barbara Palacios in 1986 and Alicia Machado in 1996.

Famously, Machado was almost stripped of the title after she binged on junk food after the contest and ballooned dramatically in weight.

Venezuelan beauties have also won the Miss World crown five times, a record unmatched by any other country.

Monday's final at the Crown Convention Center in Vietnam's beautiful beach resort of Nha Trang turned out to be a close thing although Mendoza was the bookies favourite from the start.

The biggest upset of the evening was when Miss USA, Crystle Stewart, took a tumble after tripping on her long evening gown. The ungainly fall definitely cost her a place in the runners up.

But Mendoza had looked like a winner from the start, and after nervously holding hands with Miss Colombia for a few tense minutes, she was declared the most beautiful woman in the universe by hosts Jerry Springer and Melanie B, aka Scary Spice.

Mendoza was crowned Miss Venezuela in 2007, where she represented Amazonas State. Her other, less glamorous claim to fame is being the victim of an "express kidnapping" in Venezuela 18 months ago.

“It’s something that happens in my country. You don’t even have to have money to be kidnapped," she told reporters after her victory, "that’s why I wanted to raise my voice and tell the world that violence is not the answer."

Avoiding the usual cliches of world peace and making children happy, Miss Venezuela said she would use her year in the spotlight to focus on humanitarian issues.

Now she's won the title, Miss Mendoza might also want to brush up on her interview skills. Asked by one of the judges if she thought men or women had it easier in life she said in English:

But why go for a straight answer when you've got curves? 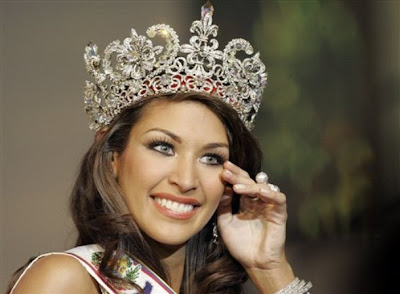 russel great blog i just did a post in my blog therepublicofchocolate.blogspot.com
about your blog and in specific your post about chuao. well done!!!!!!!!!!! check it out